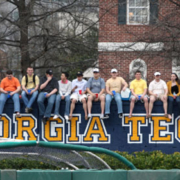 For fans of college sports, metro Atlanta is home to the University of Georgia Bulldogs and Georgia Tech Yellow Jackets and also annually hosts the Chick-fil-A Bowl and Parade and the SEC Championship.

Recreation
Metro Atlantans have ample opportunities for both indoor and outdoor recreation with more than 100 public, private and semi-private golf courses and approximately 300 golf days per year. The area offers several lakes– Lake Lanier and Lake Allatoona being the largest– for fishing, swimming, and boating. There is also an abundance of recreation leagues and clubs for popular sports, such as tennis, baseball, soccer, football, basketball, cycling and running. The Atlanta Lawn Tennis Association (ALTA), the second largest local tennis association in the nation with more than 80,000 members playing on over 200 public tennis courts, and the Atlanta Track Club (ATC), the second largest running organization in the United States serving runners and walkers of all ages and paces, are just two of the opportunities available to metro Atlanta residents.
Piedmont Park
Lookout Mountain
Centennial Olympic Park
Chattahoochee Nature Center
**Information courtesy of Metro Atlanta: An Executive Profile

Under the auspices of the Atlanta Track Club, the city is a prime venue for five-and 10-kilometer foot races, most notably the 33-year-old Peachtree Road Race, the largest 10,000-meter road race in the world. Held every Fourth of July in hot and humid weather on a course that traverses hills and plateaus extending from Buckhead’s Lenox Mall to Piedmont Park in Midtown, “the Peachtree,” as natives like to refer to it, attracts runners from as far away as Africa, Europe and Indonesia, along with a cadre of loyal natives who make it a point of pride to run the race every year. For more information on the Peachtree and other Atlanta Track Club-sanctioned foot races, go to www.atlantatrackclub.org.

As area residents look for safer ways to exercise and avoid congested roadways, the demand for a metro wide trail system has increased dramatically. The PATH Foundation, a non-profit organization, has stepped in to help create a network of trails throughout Georgia and the metro area that are used each day by thousands of joggers, walkers, bikers and skaters. Currently there are over 80 miles of trails throughout Atlanta. To find the nearest trailhead go to www.pathfoundation.org.