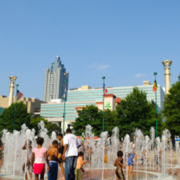 The Atlanta metropolitan area has consistently ranked high in overall quality of life when compared to other cities in the county. Location has always been key in Atlanta’s history and today it is no different. Served by one of the world’s busiest airport, Hartsfield-Jackson International, one can reach eighty percent of the U.S. population within two hours.

The cost of living in Atlanta is favorable when compared to other major cities in the country. The value of buying a home in Atlanta is high, this is especially apparent compared with other major cities such as New York City, Miami, and Chicago. The average annual salary earned is higher than the national average—another important factor to include when comparing the cost of living.

Educators and administrators continually strive to provide the best education possible for the students. In May of 2010, former Governor Sonny Perdue signed Senate Bill 84 into law, which gives Georgia the most comprehensive reform legislation in the country. Atlanta has numerous elementary, middle, and high schools, as well as charter, alternative, and community schools. Atlanta also has a multitude of renowned private schools including The Westminster Schools, which have the largest endowment out of all the non-boarding schools in the United States. Atlanta has many world renowned universities including the Georgia Institute of Technology, Emory University, and Georgia State University.

Atlanta has many landmarks that fulfill cultural and inquisitive interests. Attractions for lovers of the arts include The High Museum of Art, The Atlanta Ballet, The Atlanta Symphony Orchestra, and the Alliance Theater. Atlanta also has the Georgia Shakespeare Festival that draws in literature buffs The Fox Theatre and the Civic Center provide = entertainment for all types of audiences. There are also many live music venues, art galleries, and comedy clubs.

Entertainment and historical attractions such as the Fernbank Natural History Museum, the Carter Presidential Center, the Atlanta Botanical Gardens, the Coca-Cola Factory, the Atlanta Aquarium, and Zoo Atlanta offer entertainment and education for individuals, couples, and families of all types.

For the adventurous type day trips and outdoor activities are plentiful. Whitewater rafting on the Ocoee River is only two hours away, hiking at Stone Mountain or Kennesaw Mountain is merely thirty minutes away, and swimming in the Atlantic Ocean is just four hours away. The city of Atlanta offers outdoor activities such as walking through Centennial Olympic Park in the summer, ice skating in the park in the winter, jogging through the 189-acres of Piedmont Park, and golfing at one of the many courses.

The vast array of options for dining in Atlanta allow for palates of every kind to be satisfied. There are thousands of restaurants in the metro Atlanta area that range from simple and affordable to gourmet and classy. Atlanta not only offers cuisine from every major U.S. region, but also from regions in every continent. Atlanta residents have options ranging from colorful Moroccan cuisine to flavorful Cuban cuisine to good home Southern cooking.

The nightlife in Atlanta is continually flourishing with activity. There are many lively bars including the Buckhead Saloon, the Peachtree Tavern, and Flip Flops. Atlanta has many night clubs including Opera, Club Europe, and the Masquerade. These bars and clubs often provide live music or a mixture of contemporary and classic popular music.

Overall, Atlanta offers a quality of life that is competitive, if not superior, to many cities in the U.S. There are many attractions and activities for people of all ages and varying interests. Atlanta has a solid foundation and the people of Atlanta continually strive to make it an even better place to live.