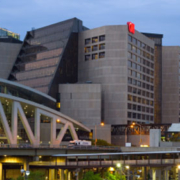 Atlanta is ranked among the top cities in the world for business climate and is ranked fourth in the United States for the number of Fortune 500 companies that are headquartered within city limits, only behind New York City, Houston, and Dallas. The metro area headquarters many major national and international companies, including ten Fortune 500 companies: Home Depot, Coca-Cola, United Parcel Service, Delta Air Lines, Southern, Genuine Parts, First Data, SunTrust Banks, Coca-Cola Enterprises, and Newell Rubbermaid.

Many other major companies have their headquarters in metro Atlanta including Chick-fil-a, Earthlink, Oxford Industries, RaceTrac Petroleum, and Waffle House. Over 75 percent of Fortune 1000 companies have a presence in metro Atlanta. Atlanta is ranked in the top ten largest CyberCities (high-tech centers) in the United States, with over 100,000 high-tech jobs.

There is a growing biotechnology district in Atlanta. Biotechnology has gained recognition through events such as the 2009 BIO International Convention in Atlanta. The Nuclear Regulatory Commission II is also headquartered in Atlanta.

Atlanta has a large financial region. SunTrust Bank, one of the largest bank chains in the U.S.,  is headquartered in downtown Atlanta. Atlanta also has a district for the headquarters of the Federal Reserve System, known as the Federal Bank Reserve of Atlanta.

Atlanta is a hub for major cable television programming. Turner Broadcasting System was started in Atlanta by Ted Turner. Turner founded the headquarters of the Cable News Network at the CNN Center. The company expanded to include Cartoon Network, Boomerang, Turner South, TNT, CNN International, and Turner Classic Movies. The ever-popular Weather Channel was started in Cobb County in the early ‘80s.

There are many modes of transportation for the business community. A majority of people commute from the outskirts of the city. Multiple Interstate Highways run through Atlanta such as I-75, I-85, and I-20. For those who wish to bypass the city, I-285 provides an accessible bypass route. The Metropolitan Atlanta Rapid Transit Authority (MARTA) provides affordable transportation for those who want public transit.