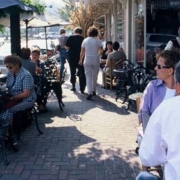 Unlike many of North Fulton’s communities, Roswell was founded in the early 19th century. The city is named after its founder, Roswell King, who built what became the largest cotton mill in North Georgia. The city was officially incorporated in 1854. By the time the Civil War started, the cotton mill employed more than 400 people, many of whom were sent north when the mill was destroyed by Gen. Sherman’s troops. During the Great Depression, when much of the area’s agricultural industry was lagging, Roswell was ceded from Cobb County to become part of Fulton at the same time that neighboring Milton County was being absorbed by Fulton. Roswell is now the eighth largest city in Georgia with a population close to 90,000, after having experienced extensive growth over the past 20 years. Due to its outstanding quality of life, the city has twice been voted one of the best places in the metro area to live by Atlanta magazine. Additionally, Frommer’s ranked Roswell No. 3 on its list of the best places to raise a family. Part of that can be attributed to its 13 parks, which comprise more than 900 acres of active and passive green space. Residents also have access to the Chattahoochee River National Recreation Area, which is part of the National Park System. Roswell boasts a quaint downtown square full of eclectic shops and some of the metro area’s best restaurants.